Party World Rastlin' These three words were enough to drive my neighbors to dress up and leave the house.
And to think, I wasn't even going to go. But after the strangely exhilarating disaster of cursing a bouncer's name, I had to do something to salvage some fun on a Saturday. So I checked the website Tam and Cole had been talking about all week and saw that sure enough, the PWR team had built a time machine to travel to the year 2017 to take on DEEP SLAM the evil wrestling machine. Costumes were encouraged to blend in to the future.

It was our last chance to defeat the machines of the future. 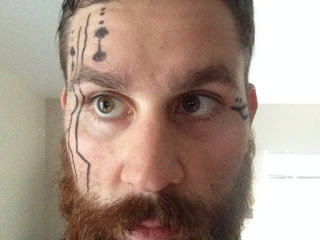 So I did what any man would do, I donned my skin-tight teal pants, made some bracelets out of aluminum foil, and put on some eye make up. Raque,l as always, far surpassed my own costume and between the two of us we convinced Tam to wear—gasp—two guitar straps! Shocker this is. Cole took much less convincing to wear his full-body green suit under his shorts and shirt. We checked each other out and agreed that our biggest concern was that we were so well dressed the wrestlers might challenge us to enter the ring (I wondered quietly how cool it would look if someone party-slammed me and my headwounds burst open). 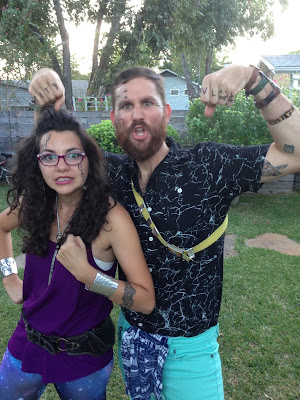 But it turned out our concerns were founded in fantasy. We weren't the best dressed at the Rassling match, not even close. Inside of the 4th tap brewery there was a man with an aluminum foil mohawk, girls dressed in gold sequins, a biker with a bloody face, glow sticks, strings of light, and armor made of beer boxes. Our costumes placed us firmly in the middle of the pack. If the future-police came, we'd make the cut, barely. Very nice PWR fans, very nice.
But my visual acuity faded as soon as I stepped inside 4th Tap Co-op. My nostrils were overwhelmed my senses with the sweet earthiness of barley, the acidic tang of hops, and the familiar funk of fermenting yeast. Ah, beer, I love thee so! I reveled in the aroma, marveled in its musk.


Nothing on this earth smells more dear,
than the aroma of sweat and men making beer.

I sauntered past the heinous line waiting for, I don't know, wrestling? I followed the red Sola cups backwards until I found those sweet sweet taps dispensing that most bitter of beverages, and realized there was a forty minute line to get a cold drink. Confused I was, oh so confused. Here we were at a brewery, with literally thousands of gallons of delicious beer around us, and we have to wait in this line most foul?


So I did what any sober man would do, and waited, and waited, and waited. And when we finally got to the front of the line, and the bartender declared that we had missed the happy hour by three minutes, and I tried to calmly explain that I had been in line since 7:30, and he shrugged, I tried not to lose my temper. Instead of party-slamming this grown man through a wall, I gave him $8 for two beers, but Dear Readers, I did not tip this man. I did not tip this man not because he refused my request for happy hour, but because instead of taking my $10 bill and placing it in the cash register, he waited for the other bartender to fiddle with an ipad and complete a transaction, then entered his own tom-foolery into an ipad, waited for it to load, complained about the speed of the internet, and finally gave me back my $2.
You guys don't have a separate line for cash?
“All transactions have to go through the ipad.”
One point for the machines. I only hoped those rastlers could score a few points for the humans.
﻿﻿﻿
Thirst quenched and waiting endured, I set off for rastlin'. If you havent been to PWR, you really must. The spectators I interviewed had various reasons to go, but one man I talked to really said it best, “I like it because they love it.”
Truth.
The people that put PWR together are insanely passionate or perhaps passionately insane.  I watched in heartbroken dismay as Body-Bag and his sister/lover Pink-Eye wrestled each other because Body-Bag had become a robot and Pink-Eye was still fighting for humankind. He would have had her beat, but she brought out their baby and melted his robotic heart. All seemed well in the world of Party Rastlin', until the nefarious DEEP SLAM came on stage and slammed them both for their insolence. Great, huh? And that's not even mentioning the sweet slams!
Wrestlers and wrestlers we watched. We saw a man wrestle four versions of himself from alternate timelines. There was a robot version, an American version, a cool version, and a female version. All versions donned the same signature goatee and uniform, even the lady. They were identical except a cybernetic implant here, some red white and blue there. Incredible! Great times, until my beer grew dry.

Again I braved the beerline, and again I was confronted with an agonizing wait while they entered every transaction into their ipad.
Having to drink this way is not healthy, because instead of simply grabbing a beer a man must stow himself to drink. I felt, after waiting a half hour at a brewery, I must get two beers, or else I might as well just get back in line. And the thing is the beers were worth it. 4th Tap Co-op makes an amazing IPA. Solid malt with effervescent flavors of grapefruit that tickled the palette just so. 7% ain't too shabby either, unless you get two of them because you waited for thirty minutes and drink them both a bit too quickly.
Thus, I had to leave and didn't get to see what happened to the robot overlords.
Perhaps I am to blame, but I think taking full responsibility is terribly mature, so I prefer to share the guilt with all the waiting, and the delicious beers, and those damn ipads.
And sure, I was sad I didn't see the match, but you know, I already knew the outcome.
The machines won.
The machines won because I had to wait thirty minutes for a goddamn beer at a goddamn brewery. I had to wait because a grown man had to fiddle with an ipad instead of just counting my money like a gentlemen.﻿

Technology is great. Its convenient and you're reading all this because of it, but there must be a line drawn in the sand. I draw my line at beer. An ipad has no place in beer drinking, and if that's the system to be used, then I think we need to stand up, don our eye make up, and slam those techno-files back to the future where they belong.

I would prefer to return to the stone ages, because there's sure to be plenty of rastlin', and at least I'll be buzzed.